In September 2014 Mistress Brita Mairi Svensdottir, Loot Mistress of Northguard, entered the Northguard Rapier Company into a contract with Ane du Vey, Baron of Endewearde, to provide rapier combatants for the defense of the Barony. This contract shall be active (quoting Baroness Sylvia du Vey) “for the duration of their tenure as Baron and Baroness of Endewearde, however long that might be”.

Below are the original articles of membership as set forth by Master Gregory Finche, Grand Pooh-Bah of Northguard and published in an early issues of the Shire of Endewearde’s newsletter, The Northern Watch.

ARTICLES OF MEMBERSHIP OF THE NORTHGUARD COMPANY

Following are the Articles of Membership of the Northguard Company. All persons holding full membership in the company will swear on steel and their honor to abide by these articles for the duration of their service. It is understood that we the northguards serve the blade dance by work and example. We encourage the best in ourselves and others.

Furthermore the Company Captain will work to serve the members of the Company and the blade dance, swearing to:

Below are the original articles of membership as set forth by Master Gregory Finche, Grand Pooh-Bah of Northguard and published in an early issues of the Shire of Endewearde’s newsletter, The Northern Watch.

I am recruiting for an independent mercenary company of duelists that will be called the North Guards.

It is my intention to gather a group of persons together who are interested in promoting the art of rapier combat in these northern reaches of the kingdom. This group will be able to organize and run rapier tourneys and training sessions, fight as a unit at wars, and share methods of combat and research. By banding together we should be in a better position to encourage the development of fencing in this area and share what we are learning.

This unit is for those seriously interested in fencing, and will have the following requirements for full membership:

Authorized in at least three weapons forms.
Own a full set of fencing equipment (weapons and armor).
Fence in period garb.
Attend fencing practices as often as one is able to.
Not currently be a member of another rapier company.
Be active in SCA activities in general.

A person interested in joining will furthermore have to have two current members sponsor their membership and have a squad willing to accept them as a member. A person who does not meet the first five requirements can be accepted provisionally as a cadet and will have one year to meet the full requirements. The two sponsors will assist the cadet in meeting these goals.

I stress that the company will be independent of any local groups. It will be open to those who want to join and can meet the requirements. I plan to offer our services for a fee of some sort to groups in the region wishing to have fencing at events but needing people to run it, or who wish to add to their local fencers in times of war. The benefits would be shared by all.

The company colors will be blue and green. Cadets will receive a rosette, full guards will receive a black scarf, sergeants a green scarf, subalterns a blue scarf, lieutenants a gold scarf. I will also be promoting the kingdom ranking system for those members interested. It is also my hope to promote other blade arts and use this unit to do so.

In service to fencing and the North Guards, Gregory Finche 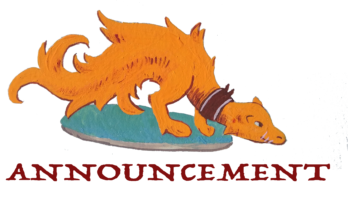 News from the Finance Committee!

If you find an error on the new website, please let us know by filling out our report form form!