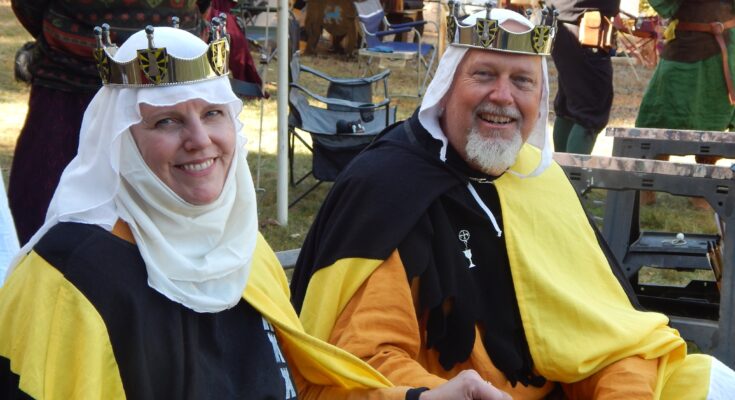 Greetings and well met! Welcome to the Barony of Endewearde! If you haven’t figured it out already, the Barony of Endewearde is a branch of the Society for Creative Anachronism (SCA) in the Kingdom of the East. The branch was established in 1987 as a Shire and remained so until 2013, when the Shire became a Barony. As a barony, the branch invested their first Baron and Baroness in September of 2013. Baron Ane du Vey and Baroness Sylvia du Vey served the barony wonderfully until their term limit expired in 2019. Meisterin Agatha and Braumeister Otto were then invested in September 2019 as the next Baron and Baroness of Endewearde. Serving Endewearde and the East Kingdom through the very difficult “plague times”, their term was cut short in October 2022 due to a family loss. Lord Gwillim Kynith and Lady Melisaunde de Vianne were invested as Endewearde’s third Baron and Baroness in October 2022 at the Endewearde Hunt.

As Baron and Baroness, we wear coronets with six pearls and are referred to as “Your Excellency”. A bow or curtsy is customary. If this makes you uncomfortable, don’t worry about it! It’s our hobby and we’re just playing the roles. Our goal is to recreate the Middle Ages as they should have been and just have fun recreating the best parts of the historical period.

There are many ways to get involved in the SCA. Simply participating in a martial activity (archery, fencing, fighting (armored combat), or thrown weapons) practice, attending “project nights” (when announced), and going to SCA events. While at events, another way to get involved is to “retain” (basically helping the baron & baroness with stuff). Please see the post regarding the Retainer Coordinator ( https://endewearde.eastkingdom.org/first-missive-a-test/ ). We look forward to meeting you.

For our dear friends, the populace of Endewearde, we have just two requests. First, please keep us in the loop with your activities. We want to see your art or see you compete. We want to support you however we can. Secondly, our great pleasure is to recognize your efforts and successes. In doing so, medallions and largesse are needed. These awards and gifts will likely end-up in your friends hands. Please consider making and donating awards and largess to share among us all.

We recognize that Endewearde is a generous community. In the event you are considering small gifts to us, Baron and Baroness of Endewearde, here are things we like (called “whims”). Baroness Melisaunde likes dark chocolate (but not fruit) and metheglins (spiced mead). Baron Gwillim likes any good mead. If it pleases you, a song would always be greatly appreciated as both Gwillim and Melisaunde enjoy music!

Above all, we hope you have fun.

See you soon!
Gwillim and Melisaunde
Baron and Baroness of Endewearde

Updates from the Baron & Baroness