The Baron welcomed everyone to court.

Master Godric of Hamtun presented Baron Ane du Vey with a crossbow made by him and a quiver made by Hrafn is-Augu with bolts made by Njall Randvisson.

Representatives from the shore of Lyndhaven spoke of Baroness Sylvia’s interest in Seal Island, a pretext for a former war between the two groups, and appointed her Warden of Hierdamrokh. She promptly gave that duty to the Foresters Guild.

Their Excellencies thanked many people with gifts:

Their populace with tower tokens made by Her Excellency

Eva and Melody, their daughters, with baskets of feast gear

Gruffyth Abernathy, their head retainer, with a mug

Brita Svensdottir, their herald, with a Norse style mug and the promise of making a banner

Then they divested themselves of all the trappings of rank:

They dismissed their champions, thanking them for theior service

Faust and Izzy came forward, as children of the incoming Baron and Baroness, to receive

the shields from Eva and Melody, children of the departing Baron and Baroness

Thomas de marr came forward to receive the seax, a symbol of friendship with Ruantallen

those who have received baronial awards

Their Excellencies then knelt before the Queen to give back their coronets. She removed

them and placed them on the baronial thrones

Their Excellencies exited the hall 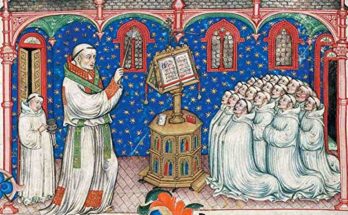 View all posts by Endewearde Herald →